Calibre, with all its Thrills and Spills, Makes for a Great Binge-watch…

It certainly would be no hyperbole to say that the quality of content available on Netflix has improved quite considerably. 2018 saw some excellent feature films and web shows being churned out for viewers across all age groups. As far as the films are concerned, the American entertainment giant has treated its viewers to some excellent feature films this year around. Right from the Spanish period thriller ‘Gun City, which deals with the countless reasons that led to the outbreak of the Spanish civil war to the Indian romantic comedy “Love per Square Feet”, an Indian romantic comedy that deals with the ever-so-serious problem of housing in Mumbai, we’ve seen some top-notch stuff on Netflix this year around.

Within the crime-thriller genre, Calibre, a film directed by Matt Palmer, kept the netizens such as myself on the edge of their seats. The film is set in the Scottish Highlands and features two friends who embark on a hunting trip. The rest of the film deals with the trials and tribulations both of them face in their bid to keep their crime under the wraps.

The story begins rather simply, with two childhood friends Vaughn and Marcus embarking on a hunting trip. Vaughn and his wife are expecting their first child.  Both of them make their way to the Scottish Highlands. The woods appear silent, but there seems to be a significant degree of uneasiness engulfing the highlands. The economic hardships of people, the lack of investment in the area. Both Vaughn and Marcus realize that the place isn’t as welcoming as they thought it’d be.

While hunting, Vaughn sees a deer, lines it up, and shoots, but the bullet accidentally hits a young boy, who happens to be camping in the woods along with his father. Things turn even murkier when Marcus, in his bid to protect Vaughn, ends up shooting the boy’s father.  Then begins a game of cat and mouse wherein Vaughn and Marcus try almost all tricks in the bag to cover their crime.

The film’s story is pretty simple. It doesn’t have anything extraordinary, but what stands out in the entire film is the execution. The locations where the film has been shot are beautiful. Another striking feature of the locations happens to be the fact that they do look spooky and secluded. The locations add a certain degree of tension to the overall scenario.

The story might be simple, but it’s quite gripping. Kudos to the film’s writer for adding a pinch of salt and pepper to a cliché suspense thriller. All the ingredients seem to be in place. There’s a perfect blend of suspense, drama, tension, and adrenaline-pumping action. The writers have stuck to the basics and have nailed it, literally. The story is tightly-knit and nothing feels unnecessary. Also, the 100-minute runtime doesn’t feel long and keeps the viewer hooked and guessing. 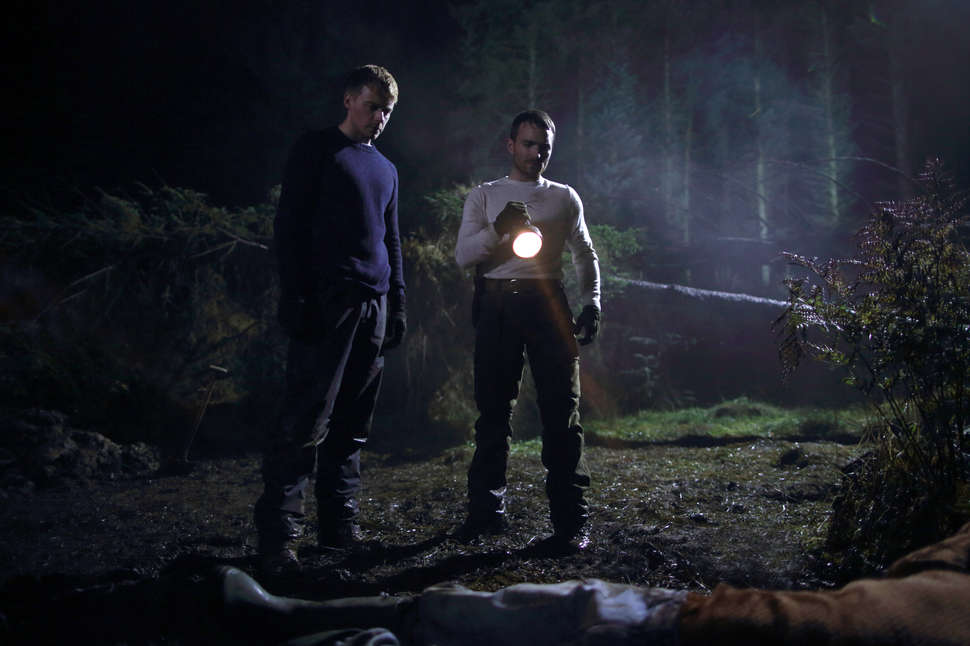 Take nothing away from the hard work put in by all the actors. The likes of Jack Lowden, Martin McCann, and Tony Curran have pulled off stellar acts to give us one of the finest thriller films of the decade. The actors haven’t relied on dialogues, but on facial expressions. The fear and uncertainty, both of which form the heart and soul of the film, can be clearly seen on the lead pair’s face. There’s no fancy make-up stuff. The faces of all the actors narrate stories. As a viewer, you can feel the tribulations both Vaughn, as well as Marcus, are going through after they accidentally murder the child and his father.

The Dichotomy, the Emotions, and Everything in Between

Throughout the course of the film, there’s an uncanny uneasiness that a viewer can feel. There comes a moment in the film when both Vaughn and Marcus think “Should we confess, or should we not?” There happens to be tension and uncertainty brewing everywhere. Vaughn, in particular, is adamant on keeping the secret covered. He fears for his unborn child and his wife. The mental and emotional toil both of them are subjected to makes one develop a softer side for them. (Come on, you have to feel sad for them. After all, they didn’t murder the boy and his father intentionally. It was an accident. They were at the wrong place at the wrong time, to say the least.

Logan (Tony Curran) tells Vaughn and Marcus about the economic problems their village happens to be facing. There seems to be a severe dearth of investment in the area. Marcus promises to bring business and investment into the village. The locals happen to be well aware of the economic prosperity Marcus can bring in the area. The director hasn’t stretched the issue too much. He’s left it wide open and moves on to concentrate on the characters.

Just about nothing. The film stays true to its purpose. It doesn’t go haywire even once. Also, the climax happens to be quite inevitable but take nothing away from the way it has been executed. I hope there aren’t any spoilers in this review. The film makes for a great binge watch. Miss it at your own risk.