Addressing the Severe Lack of Sensitivity…

The video of Zomato’s delivery guy eating food from a parcel meant to be delivered went viral on social media in December last year. Zomato, the food delivery giant, was quick to react and sacked the guy for tampering with sealed food parcels. After the delivery guy was sacked, the company was quick to clear its name and tweeted ‘we take food tampering very seriously’. The incident ended up attracting a lot of eyeballs for a week or so,  but the buzz around the incident eventually died down. 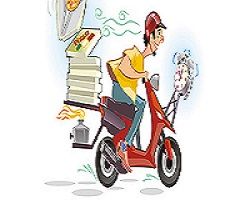 But hold on, I have a question for all those who think that, in the aforementioned case, the guy was at fault. My question is: Who is at fault is people are required to steal food? I don’t know what others think, but I strongly feel that it was not the employee but the organization which was at fault.

Let us not forget that we’re dealing with a guy who can barely manage two square meals a day. His monthly salary is less than half of what I am earning at 24. He may have a family to support. With such a measly income, you cannot expect him to afford meals bowls worth 600 bucks.  This act of his, in all fairness, speaks volumes about the extent of helplessness he must be going through.

The Twitterati came out all guns blazing and lambasted the delivery guy with all their might. It appears that we, as individuals, derive sadistic pleasure out of somebody’s misery. Human beings always love to shed their anger on somebody who is poor and helpless. That’s basic human nature.

Eating somebody’s food isn’t that big a deal. My father always says: “ Khaane par kisi ka naam thodi na likha hota hai” ( Nobody’s name is written on the food that is being eaten), implying that anybody can eat it.

Helplessness and poverty make us do weird things and this is just one of the countless examples that keep coming to light every now and then. Almost every single day, we bump into delivery boys working for Swiggy, Zomato, and other similar food delivery startups. A friend of mine works for Swiggy, one of the major food delivery start-ups within the country. His shift begins at four and ends after midnight. He migrated to Delhi/NCR around three years back in search of better employment opportunities.

During one of our meetings in December last year, he told me how a customer had scolded him for not being able to deliver the food on time. He then told me about another customer, who had ordered from Berco’s in Janakpuri. The food couldn’t be delivered on time because of excessive traffic during the evening. He told me how he was lambasted by the customer who refused to pay for the food. In the end, he had to pay for it out of his own pocket. The order cost somewhere around INR 700.

It breaks my heart to know that people are no longer sensitive towards those who are not as fortunate as they themselves are. The problem here is that people are impatient. They want everything served before them in the blink of an eye. No one wants to wait. Waiting for something sounds like a curse, doesn’t it? I think we were far more patient when we were children. That is perhaps because we were made to understand that everything in this world takes its own sweet time, but for a generation that has grown up on fast food, waiting for something is no less than a sin.

I know we have 10,000 different things to look into and the time at hand is less, but this, in all fairness, doesn’t mean that we’d shed our anger on people who are far less fortunate than us. I am, in no way, trying to shoot orders at anybody. I am just saying that all of us need to have a certain degree of patience. A small theft occurs and, within no time, our Twitter and Facebook walls witness an avalanche of posts. We don’t even bother to understand the issue in its entirety

To top it all, the basic problem with this world ( and I am including myself here) is that: Almost all of us are ready to shoot our opinions, but not many bother to understand the problem and come up with an effective solution.

All we need to understand here is: The guy delivering food at our doorstep is not as fortunate and privileged as we are. He too is doing his job in order to keep his body and soul together.