Past is an excellent place to visit, but certainly not a good place to stay. The Third Level by Jack Finney is an engrossing story set in the 1950s. The story is studded with many undertones of irony. It takes you back in time, in a world when people hadn’t seen two of the bloodiest wars in the history of mankind. It goes without saying that people find it hard to come to terms with the ups and downs of everyday life. At times, people tend to hallucinate things. These hallucinations end up providing some transient relief from the trials and tribulations of life.

The Third Level tells the story of a 31-year-old guy named Charlie (not Charlie Sheen). One fine evening, he decides to take the subway from the Grand Central Station. He ends up finding himself on the Third Level of the Grand Central Station (There were only two levels). There, Charlie observes spittoons lying on the floor. Charlie sees people wearing derby hats and having gold watches. A Currier & Ives locomotive also catches his attention.

Realizing that he has gone back in time, Charlie tries to buy tickets to Galesburg. During the lunch hour the next afternoon, Charlie withdraws all of his savings (Nearly 500 US Dollars) to buy old-style currency notes. Charlie narrates this incident to Sam, his friend, who works as a psychiatrist. Sam concludes that the Third Level is nothing, but a  figment of Charlie’s imagination. The miseries which the modern world, full of war, worry and terror, had on offer made Charlie hallucinate about the Third Level’s existence.

Charlie succeeds in finding a piece of evidence related to the Third Level’s existence. He discovers a letter addressed to him by Sam, his friend who works as a psychiatrist. The letter was dated 18th July 1894. It seems that Sam wasn’t as clueless about the third level’s existence as he appeared to be.

Character Sketch of the Protagonist:

Charlie is a 31-year-old guy. He wore a Tan Gabardine suit (I remember Roger Moore wearing Tan Gabardine suits when he portrayed James Bond on-screen). He’s an ordinary guy running a family. Peace and serenity happen to be the two things he wants rather desperately. His decision to stay back there in the year 1894 reiterates his desire to live a peaceful and a Joyous life with his wife. 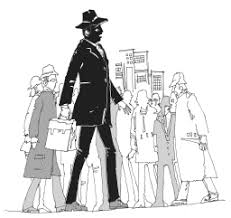 The story explores the concept of time travel. Jack Finney throws ample light on the mentality of a common man. He succeeds in exposing the vulnerable side of Charlie. A myriad of problems conspired to corrupt Charlie’s mind. These problems robbed him of his senses, and in his panic, he hallucinated about the third level at the Grand Central Station. Even though it was hard for Charlie to believe his eyes, he decided to stay there, in the year 1894.

All of us love being secure. All of us want comfort. A common man wants peace and security.  Like any other, Charlie too appreciated the so-called ‘pleasures’ of everyday life and the security of the familiar. He wanted to stay there because 1894 was much more peaceful, secure, serene. The world hadn’t seen the repercussions of war. War, terror, disease, and insecurity had got the better of ordinary people. Charlie wanted a temporary refuge from reality. He sought relief, peace, and happiness.

All in all, The Third Level brings us to the conclusion that people find it hard to make peace with unpleasant things they come across in life. The story further makes the reader realize that  past and future are real illusions. They exist in the present, which is what there is and all there is.

One thought on “Revisiting ‘The Third Level’ by Jack Finney”